After several weeks of escalating tensions, on February 21, 2022 Russia announced that it would recognize two pro-Moscow areas of Ukraine – Donetsk and Lukansk – as independent states. Russia then quickly moved troops into these two areas. Investors, understandably, may be wondering how markets could react to further military escalation.

Many countries have responded to Russia’s recent actions with sanctions. Germany notably announced it would block the Nord Stream pipeline, designed to deliver natural gas from Russia to the rest of Europe. The pipeline had been completed and was awaiting German approval to begin operating. Other NATO members – including Canada, the U.S. and the UK – announced financial restrictions.

Questions now remain around Russia’s next moves and how countries will continue to respond. Putin’s speech on February 21st suggested he’s questioning Ukraine’s sovereignty; however, uncertainty remains around whether he is planning a full-scale invasion or will stop at moving into these two regions that have close ties with Russia.

How markets respond to acts of war

While market uncertainty may persist for some time, there are two important messages investors should keep in mind:

A strong investment plan is designed to withstand periods of volatility so investors don’t have to react. With that in mind, let’s look at some evidence that shows how markets typically respond to acts of war. The chart below looks at how U.S. equity markets have historically reacted in response to acts of war and terrorism. 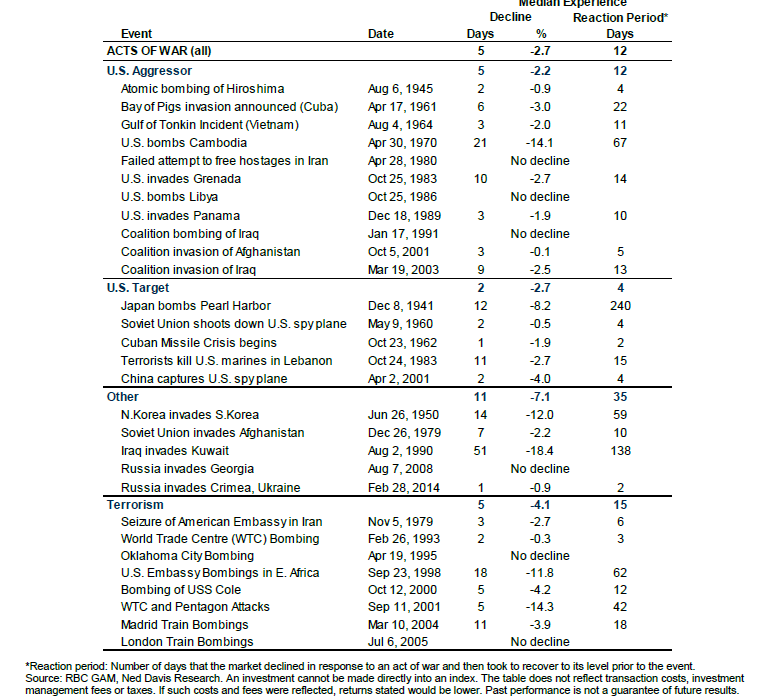 What you’ll notice is that market declines tend to be short. They typically last 5-11 days, depending on the situation. The actual change in the market is also relatively benign, and often more muted than what investors might think. In fact, historically they’ve been more muted than the decline U.S. equity markets experienced in January of this year.

Of course, no one can predict with certainty how financial markets will react during a war or other conflict. However, one thing is clear: having a long-term view is likely your best ally in times of crisis.

This has been provided by RBC Global Asset Management Inc. (RBC GAM) and is for informational purposes only, as of the date noted only. It is not intended to provide legal, accounting, tax, investment, financial or other advice and such information should not be relied upon for providing such advice. RBC GAM takes reasonable steps to provide up-to-date, accurate and reliable information, and believes the information to be so when provided. Past performance is no guarantee of future results. Interest rates, market conditions, tax rulings and other investment factors are subject to rapid change which may materially impact analysis that is included in this document. You should consult with your advisor before taking any action based upon the information contained in this document. Information obtained from third parties is believed to be reliable but RBC GAM and its affiliates assume no responsibility for any errors or omissions or for any loss or damage suffered. RBC GAM reserves the right at any time and without notice to change, amend or cease publication of the information.